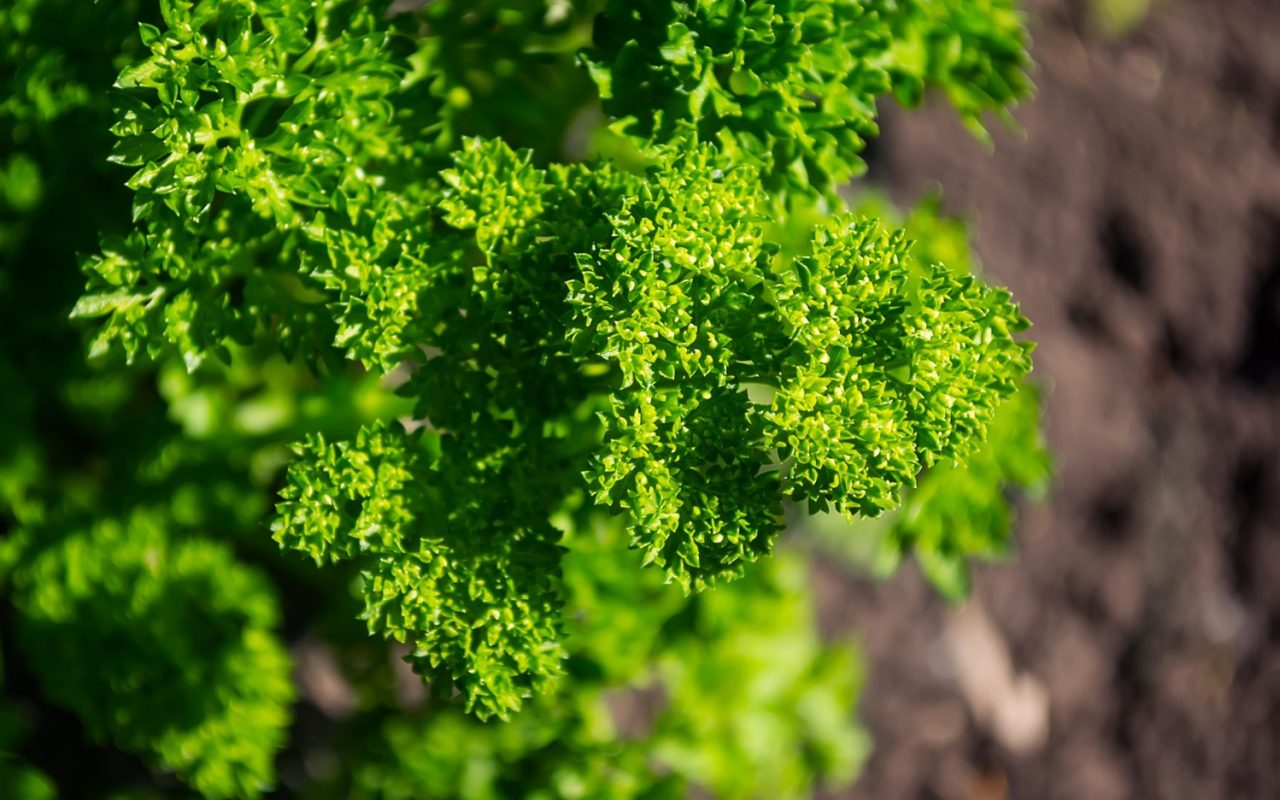 Parsley will always have a special home in my kitchen garden. This plant tells the stories of flying medieval witches and of brave Greek warriors. Parsley is even associated with hell and the devil, as well as joy and celebration. This herb has many health benefits and also used in witchcraft and curses – what a colourful background!

Parsley is a species of the genus Petroselinum in the family Apiaceae, commonly known as the carrot family. This aromatic biennial herb grows from 10 – 30 inches (30-80 cm) high, forming a rosette of leaves in the first year and a stem with small yellow flowers and small dry fruits in the second year. Parsley leaves have a fragrant, fresh, and slightly spicy aroma and a tangy-sweet flavor. Flat-leaved parsley (var. neapolitanum) also called Italian, French, or celery-leaved parsley has a slightly stronger aroma and is often used in savory dishes, while the curly type (var. crispum) is the best choice for garnishing dishes.

Symbol of joy and festivity

Parsley is native to central and southern Europe, in particular to the Mediterranean region. Parsley was originally grown to be used in rituals and for medicinal properties. The Greeks held Parsley in high esteem. For example, heroes and warriors of ancient Greece were honored with parsley garlands—symbolizing joy and festivity.

Greetings from the Underworld

The use of parsley dates back to ancient Greek and Roman mythology. According to legend, parsley sprang up where the blood of a Greek hero Archemorus was spilled, whose name means “forerunner of death”. Dedicated to Persephone, goddess of the underworld, parsley was used by Greeks to fashion wreaths for graves. One old legend explains the reason for the extremely slow and unreliable germination of parsley is that the seed goes nine times to the devil and back before coming up. And seeds that never come up (never sprout) … these are the seeds that the devil keeps for himself. It is true, the germination of parsley is very slow. I like to say that parsley is a plant that teaches us patience.

Herb to keep you healthy

This herb is an excellent source of vitamin C, K, and A, iron, and magnesium. The flavonoid “apigenin” contained in parsley, is a powerful antioxidant that can help reduces allergic reactions.

Parsley also contains the essential oil compounds apiole and myristicin—a stimulant and hallucinogen which is also present in nutmeg. These compounds are toxic at high doses, although safe to use in the amounts in recipes.

Almost every savory dish tastes better with a little bit of chopped parsley either cooked in or sprinkled over the top. Parsley’s fresh, slightly spicy, and tangy leaves are versatile and popular ingredients in soups, salads, and sauces. It compliments omelets, stews, and stuffing for meat. Parsley has an almost limitless number of uses. It can be consumed fresh, dried, frozen, or marinated, but its taste and nutritive value are greatest when it is fresh. I always add parsley at the last minute to cooked food.

And now is the perfect time to go and pick up some parsley stems from my smart garden to make a powerful butter and chopped parsley sandwich. Eating parsley gives a good dose of vitality and protection. But be careful, the same simple parsley has been used for conjuring a werewolf and has been used by witches for years in several ointments—for example, ointments for flying. Off I go.