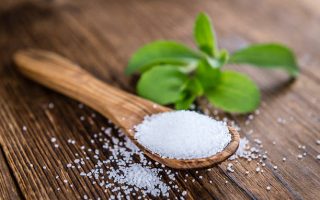 For hundreds of years, the Indians tribes have used sugar leaf primarily for sweetening drinks and food. They knew that only one leaf could sweeten the bitter taste of mate. According to my personal experience, I can say that only one leaf can kill my craving for sweets.

The diversity of our plant kingdom is just amazing, with so many different colors, fragrances, and flavors. Sometimes, meeting a new plant might really surprise you. Like stevia, it looks like a usual plant with simple small leaves. Honestly, I am telling you that I can never forget my first meeting with this small “simple” plant. I already knew a little information about this is a plant—the leaves are hundreds of times sweeter than refined sugar. But still, when I tasted one leaf, I was really surprised! It was something I never tasted before. Our first meeting touched me so deeply that stevia reaches a firm place in my smart garden.

Stevia has a truly remarkable history. Guarani tribes from Paraguay knew of this plant more than 1500 years ago and called it caᾱ èhé – a sweet herb. The stevia plants have been used to refresh one’s breath and chewed for their pleasant flavor. The main use of stevia was as a sweetener, particularly in a green tea ritual. Although stevia was well known in his homeland for a very long time, this plant was relatively unknown to the rest of the world just a few dozen years ago.  Today, stevia has found use even farther from its homeland. A large number of cookbooks, blogs, and YouTube recipes use stevia in the preparation of different meals—starting from a simple breakfast all the way up to the most royal desserts.

Stevia (Stevia rebaudiana) belongs to the sunflower (Asteraceae) family. If somebody wants to meet this unusual plant in his homeland, then she would have to travel to Paraguay or Brazil. There, the plant could be found growing in semi-arid habitats ranging from grasslands to mountain terrains.

Stevia is a small perennial with slender erect branches 23-27 inches (60-70 cm) high. The most valuable parts of the plant are its characteristically toothed leaves. This plant is also known as “sweet leaf” or “candy leaf”. The Stevia family is named in honor of the Spanish botanist and physician Pedro Jaime Esteve, a professor of botany at the University of Valencia.  The epithet rebaudiana is given as a result of Paraguayan chemist Dr. Ovidio Rebaudi, who first tried to track down the secret of sweetness. It was only after the death of Rebaudi, that the French chemists M. Bridel and R. Lavieille found a cause of the sweet mystery of stevia. They found out that the sweetness of “sugar leaf” is from glycosides, the best known of which is stevioside—150-300 times sweeter than sucrose.

Stevia arrived in Europe around the 17th century but has not attracted much attention. Asian countries, especially Japan, valued the stevia plant highly. After a decade of thorough research, it was announced that stevia and its products are safe to use in Japan. Japanese scientists have found that it has a number of benefits for the human body and predict that the plant will have a glorious future. Actually, it is already here and people are looking more and more into refined sugar alternatives like Stevia.

Stevia has been added as a natural sweetener to soft drinks, tea, coffee, chewing gum, and sauces. It is also used to make toothpaste taste better. The main benefit of using stevia is that it is natural, and adds almost zero calories to our body. It should also be noted that stevia does not affect the blood sugar level. The taste of stevia might be unusual at first with a strange aftertaste.

Recent scientific trials firmly establish that this sweet herb has, in fact, many health-benefiting phytochemicals that help control blood sugar, cholesterol, and blood pressure in addition to its use as a natural sweetener. Together with the rise in demand for low-calorie food alternatives, stevia has drawn the attention of health-conscious fitness lovers all over the planet.

For hundreds of years, the Indian tribes have used sugar leaves primarily for sweetening drinks and food. They knew that only one leaf could sweeten the bitter taste of mate. According to my personal experience, I can say that only one leaf can kill my craving for sweets. 🙂

Why not try growing this mysterious plant on your own? I hope that you can get the opportunity to taste the leaves of stevia. I am not surprised to hear back from you and your surprising exclamation “it is not possible, this leaf is so sweet!”